Carrying on with my current love interest – Berlin – it seems only natural to provide you with a little ‘getting around on a bicycle’ perspective from one whom occasionally dabbles in such, back on the home front.

Background – I like cycling, but not exerting, so I’m not one to deliver on speed, however can happily peddle for hours if it is flat and not raining. So, Berlin, Sunday 4 May was ideal for an outing.

Team Family hired bikes from our hotel (Casa Camper Berlin – top location, feel, service and view from breakfast) and chose to take in several sites between us (in Mitte) and Charlottenburg (the location of the Helmut Newton Museum), and it couldn’t have been easier, safer, more satisfying and interesting. 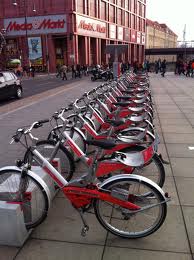 Look these are just like the ones in London (though not blue) (Image sourced smutpedaller.blogspot.com)

The Tiergarten – you can see why the 13 year old was cheery (Imaged sourced berlin.de)

And I thought Oxford was a city for cyclists.

And a little map which covers the area we explored (image sourced overt.org)