by Dennis Kelly
at the Royal Court Theatre, London

I’m hoping that this doesn’t sound creepy…but I have a thing for Carey Mulligan. 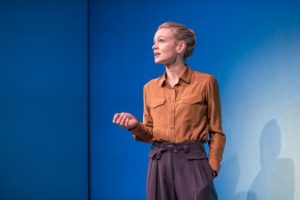 I’m no stalker – rather super fan, so when opportunity knocked in the guise of a new play she was performing in at the Royal Court Theatre, I pounced on it.

It’s roughly 18 hours since I abandoned my seat, however I’m still entirely consumed by it.

Sadly I’d be exposing you to a clear injustice by examining the plot, for this is key to the performance, however I can screech this, CAREY MULLIGAN WAS CLEARLY BORN TO PERFORM. I can’t honestly remember a time in my life that I haven’t been so captivated by a single performance, something she maintains for approximately 90 minutes, with no other actors to spar with, it’s just you the audience (whom she knows how to work), and her phenomenal talents. 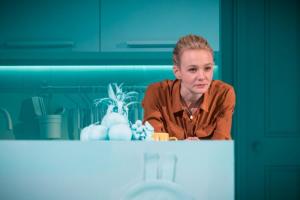 She confides in you; she shares with a glint, scandalously amusing encounters; and she shows you her parental side. She keeps you so close. You trust her, you’re with her, her emotions and shock and pain become yours. And then the play is over and you are left with her experience and this needs to be processed, that’s where I am now. I’m disturbed but also elated.

Dennis Kelly gives you the material: the words, the laughs, the story, the terror, he doesn’t hold back. He forces you sit up and take note. Mulligan makes it terrifyingly real. 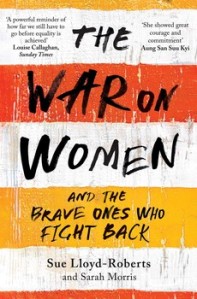 Nine days ago I wrote to my dearling friend Chrissie that I never wished to pick up another book after completing the outstanding The Standing Chandelier by Lionel Shriver, so I’m rather relieved I caved in on this decision and headed off to collect an offering from my non-fiction pile.

The War on Women: And The Brave Ones Who Fight Back is tough and informative. An education, a challenge and a book that demands reading. It’s not enjoyable, but it’s very good.

Blowing my cover of naïvety, I wasn’t familiar with Sue Lloyd-Roberts’s work. I could plead not having a TV (but I did when her work was being aired), or I lived in another solar system (yet another fabrication), but the truth is…I have a sick preference for brain numbing on-demand itvBe programmes, so hard hitting truths I’ve tended to tread softly around.

You’ll be delighted to note – that’s about to change.

I’m not going on a crusade, rather thanks to a Blackwell’s event on the 6 February which acquainted me with this book and her daughter (as sadly the multi award winning journalist who authored this publication died in 2015), my comprehension of the injustices that the female of the species confront globally has been increased ten-fold.  It’s poo, putting it mildly for my junior readers, but by no means should we feel defeated.

From ‘The Cruellest Cut’, Chapter 1, you know that it’s not going to be light and fluffy, but knowledge and discussing the dreadful, the uncomfortable, the unjust, help address the issue.

I really learnt. Ashamed by my lack of knowledge as I turned the pages. I’m now not just better informed and alarmed, I can also appreciate that horrid cruelty needs to be ‘outed’ and become part of our everyday conversation. We need to be outraged and have it as front page news. The more people made aware of the issue, the greater the likelihood that people will fight for what’s right and protect those whom have no voice. We need to teach respect. Not just of women, but of all people, so it becomes part of our nature.

The book couldn’t have been assembled better. Each chapter has a different focus. You’ll learn about the laundries run by the nuns in Ireland; the Dirty Wars in Argentina, the sexual abuse of women protestors in Egypt; Forced Marriages; Sex Trafficking; and the sad reality that where the UN Peacekeepers head, the sex trade follows. But that’s not all. Sue Lloyd-Roberts provides you with the facts, she interviews both the abused and the perpetuators and it’s up to us to decide what we’ll do with the information.